Superfood Swaps that Save you MONEY! 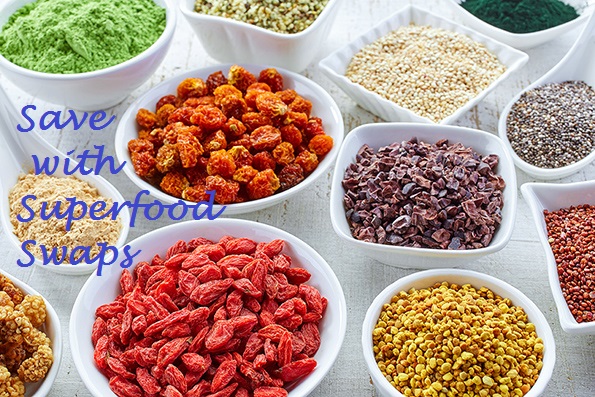 Healthy foods, especially superfoods, have a notorious reputation for being expensive, and a lot of people use that as an excuse to grab fast food and sacrifice their health.

While high-quality food is the greatest investment you can make for your health, sometimes you just can’t afford to splurge on goji berries, maca, and that fancy camu camu powder.

Fortunately, there are plenty of nutrient-packed foods proven to protect against cancer, prevent heart disease, lower blood pressure, and more – that won’t break the bank.

Next time you run out of an ingredient for your superfood smoothie, save yourself a little cash and swap out high-priced items for their more accessible counterparts.

Superfood: Goji berries
Instead choose: blueberries
Chock full of vitamin C, goji berries are famous for their super sweet taste and bright red color. They’re abundant in China and the Himalayas, where they’ve been used for centuries as a medicinal plant that can treat everything from eye problems to liver disease. But these tiny berries are high in fructose and typically pretty pricey.

Instead, opt for blueberries. You can buy them frozen or fresh (frozen fruit typically retains the same amount of nutrients as the fresh kind!), and they’re just as good as gojis. One serving contains a quarter of your daily recommended value of vitamin C and almost 20 percent of the fiber you need. Plus, they’re proven to contain cancer-fighting antioxidants and improve memory.

Superfood: Kombucha
Instead try: apple cider vinegar
The fermented, vinegary drink is popular among the health set for its probiotic benefits—but it’s pretty difficult to tell just how much beneficial bacteria is in a glass of the ‘booch. Instead of shelling out $4-$6 for the stuff, take a swig of organic unfiltered apple cider vinegar (ACV). Brands of ACV like Bragg’s contain what is known as “the Mother” which has beneficial pectin, enzymes, and probiotics that encourage healthy gut bacteria. And you can use ACV so many different ways—from facial toner to kitchen cleaner, it’s a staple for any healthy home.

Superfood: Cacao
Instead: dark chocolate
Cacao is the raw form of chocolate. Pure cacao has over 300 beneficial chemical compounds, and loads of antioxidants, but it can be bitter and expensive! Grab some dark chocolate. Yes, it’ll be a little bitter, too. But very dark chocolate—the kind without any added dairy—retains the initial benefits of cacao. Remember to grab a bar that’s low in sugar, additive free, and is made from organic, fair-trade cacao beans.

Superfood: Wheatgrass
Instead pick up: bok choy
Wheatgrass had a big moment in the nineties—remember how it was available at practically every juice bar around? And it’s still a popular ingredient in superfood green powders. But it’s not exactly delicious and it’s difficult to get enough of it to see much benefit. Instead, try bok choy. This cruciferous vegetable is one of the most nutrient-dense items you can find at your local farmers’ market; one serving of bok choy delivers vitamin K, vitamin C, vitamin A, potassium, and vitamin B6.

Superfood: Maca
Instead go for: chia seeds
Known as an adaptogen, maca root powder is prized for its energizing powers and often cited for its ability to balance hormones. Despite the fact that it’s mighty tasty in smoothies and super elixirs, there isn’t much scientific evidence that maca has an effect on our hormonal levels. One way you can support healthy hormonal function? Increase your intake of omega-3 fatty acids. Try out chia seeds—they’re full of good-for-you fats, protein, and fiber. Nicknamed “runner’s energy,” one tablespoon mixed into a smoothie or oats can give you a boost in the morning if you’re feeling sluggish.

Do you have a favorite superfood or superfood swap? Share in the comments below!

BACKEating with the Seasons
NEXTDry Brushing Technique for Skin Health (and MORE!)

Information on this website is provided for information and educational purposes only and is not intended to diagnose or treat any health problem, condition, or disease.